What I cannot imagine is a life without Lily, for I do not believe it would be a life worth living. 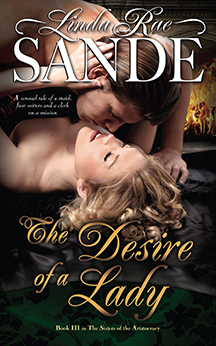 As the illegitimate daughter of an earl, Lily Harkins spent her early years toiling as a scullery maid and later as a lady’s maid for Lady Samantha. When her brother, Gabriel Wellingham, paid a call to claim her as his sister, Lily was surprised and a bit overwhelmed. With recognition as the Earl of Trenton’s half-sister came the responsibility to learn the ways of the ton as well as the promise of a substantial dowry—an irresistible draw for many a man who might require the income to pay off gambling debts or shore up flagging bank accounts.

William Overby may have started his life as a street urchin in the Seven Dials, but he worked his way from being Thomas Wellingham’s caddie to clerking at the man’s business. Having outfitted his bachelor quarters with excess inventory from Wellingham Imports and rather satisfied with his lot in life, William has no need to wonder what’s next. That is, until he meets the comely blonde chit who’s paying a visit to her cousin Thomas. The idea of courting—the idea of taking a wife—is suddenly all William can think about.

Thanks to Lady Samantha’s patient tutoring, Lily had a successful come-out—too successful. Having read the stories in the gossip sheets from London suggesting his sister is being courted by no fewer than four aristocrats, Gabriel sends for her. He’s determined to hear her side of the stories before deciding which man is good enough to be her husband.

Having suffered a good deal of embarrassment in her encounters with gentlemen claiming they wished to court her, Lily wonders if any of her suitors are sincere. And just who is the young man who works for her cousin Thomas? Is he a suitable suitor? Or just another fortune hunter after her dowry? While on her way to meet her brother in Staffordshire, Lily decides she may have to spin a few tales of her own to get her way in The Desire of a Lady.