As an author of historical fiction, we’re fascinated by the places that still exist, even if they aren’t quite all there. The Roman Forum is one such place. Once the heart of the former Roman Empire, it featured a number of temples and government buildings that are now in ruins.

The first half of our day was spent traveling by bus from Florence to Rome, a comfortable trip with picturesque scenery. Early spring in Italy means everything is green—farm fields, vineyards, and trees.

After we checked into our hotel, we made our way to an outdoor lunch spot near the Forum. Our guide for this portion of our trip, Linda, was well-versed in the politics and archaeology of Ancient Rome. As we stood beneath the ruins of the Palatino Domus Severiana, she described the daily life of Romans and those who were important to the rule of Rome. 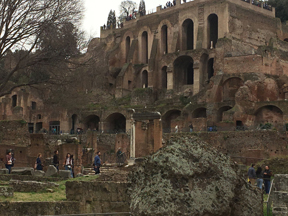 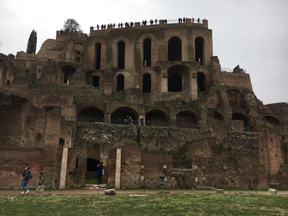 The Roman Forum spans a huge area.  Two large arches are featured: the Arch of Septimus and the Arch of Titus. 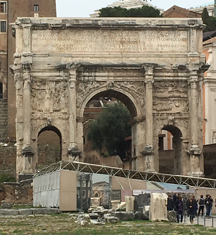 Ruins of the Basilica Aemilia, once strewn across the grounds, have been lined up to show the location of the foundation as well as the placement of the columns.

The House of the Vestals was once home to the Vestal Virgins. Statues of them line the walkway in front of this ruin. 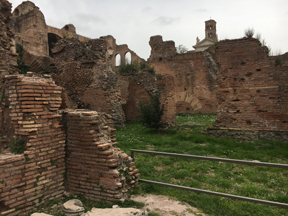 The Imperial Forum is a mere shadow of its former glory. 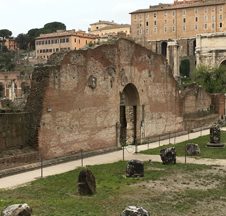 The Temple of Antonius and Faustina is one of the best preserved of the structures, likely because it’s been used as a church, while the Temple of Castor and Pollox, the Temple of Saturn, and the Temple of Vesta have only a few columns left standing. 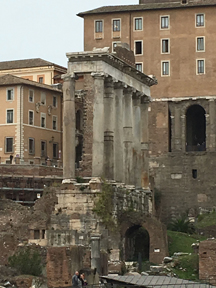 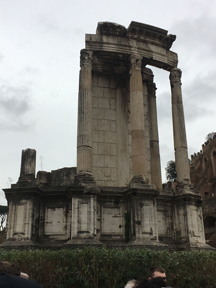 A short walk past the House of Vestals, and soon you’re in the shadow of the Colosseum. This structure was built between 72 and 80 AD from stone and concrete.

Once the home of gladiatorial combat and spectacles, the Colosseum at first feels small—how could this arena have hosted crowds of up to 87,00 people?—but once you climb the concrete steps and emerge into the arena itself, the scale changes completely. 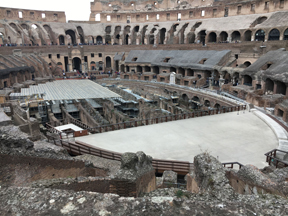 It’s HUGE (and the largest amphitheater in the world). With 80 entrances and an efficient layout, thousands of people could make their way to their seats in a short amount of time. Fifty-thousand people would have been seated in the tiers that reflected their status in Roman society. On hot days, a retractable awning, or velarium, would cover the spectators.

On the day we visited, over half of the area beneath the level of the original arena’s floor was covered due to ongoing restoration work, but the visible areas provide a sense of the elaborate tunnels, passageways, and rooms that would have housed animals and gladiators during games.

As for that Roman concrete, there’s a reason it’s still intact—it grows stronger over time.  The Romans were known for producing the perfect concrete using volcanic ash, lime, and seawater. Mixed together with volcanic rocks, it was spread into wooden molds that were then immersed in more seawater. As the seawater percolated through the concrete, it dissolved components of the volcanic ash and crystals, creating new binding minerals to grow. Within a decade, a very rare hydrothermal mineral called aluminum tobermorite (Al-tobermorite) and a porous mineral called phillipsite formed in the concrete. Those minerals gives Roman concrete its strength.

Although these days those minerals can be made in a lab, they very difficult to incorporate into concrete. And to achieve that added strength? It takes centuries to achieve.

Even given the growing strength of the Roman concrete, only one-third of the Colosseum is original. The other two-thirds were damaged due to earthquakes, vandalism, and fire.

On the way back to our hotel, we passed by the Castle Sant’Angelo, better known as the Mausoleum of Hadrian. Originally built by Hadrian to be a mausoleum for him and his family, it was instead used as a castle fortress by popes and is now a museum. 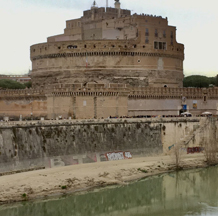 Next up: Rome at night!