After a day spent on the Acropolis and touring Athens, we departed in a motor coach for Sounion when the sun was still high in the west. The scenery was beautiful and the weather perfect for sightseeing and dining.

The first reference of this deme (municipality) occurs in The Odyssey. Homer recounts a tale of how when the Greek commanders were returning from Troy, King Menelaus of Sparta’s helmsman died. He did so while they were sailing around “Holy Sounion, Cape of Athens.” The ship landed at Sounion so that the helmsman could be afforded proper funeral rites—cremation on a funeral pyre on the beach.

Located on the southern tip of the Attic peninsula, Sounion was once a strategic stronghold of Athens.  Their grain supplies from Euboea (Evia, the second largest Greek island after Crete) came by ship and passed by this landmark, requiring it be protected from the Spartans. 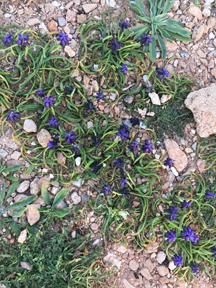 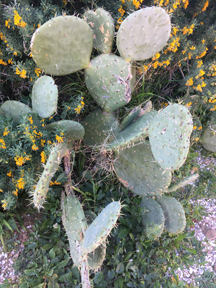 Two-hundred feet above the sea on a cliff, the Temple of Poseidon is an impressive monument. Doric in style, this temple was completed in 440 BC, and was a replacement for one originally built of tufa. The first temple was destroyed when Greece was invaded by Xerxes I. The design of the temple is a typical hexastyle, so it had a front portico with six columns. Only some of the original columns are left standing.

As the sun sets, this temple takes on a magical appearance, the columns turning golden in the late afternoon light.

With a new moon, the sight was striking. A huge crowd had assembled on the edge of the cliff to watch the sunset, and we were reminded of a similar event when we last watched the sunset on the beach at Carmel-by-the-Sea (although no one in this crowd applauded when the sun finally set into the sea). 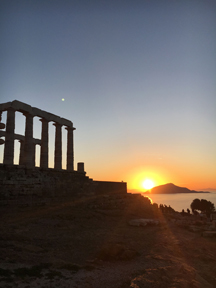 Once the sun was completely set, we headed for a nearby seaside restaurant and enjoyed a dinner of sea bass.

This was our last night together as a group. Although everyone else had to get up at two o’clock in the morning for the trip to the Athens airport, we were able to sleep in a few more hours before we, too, had to get to the airport for the last leg of our stay in Greece—Santorini.