See that hump-backed mountain in the background of the image above? That is Mount Vesuvius, and it’s the only European-based volcano to have erupted in the last one-hundred years. Back in 79 AD, it spewed a huge cloud of ash, stones, and volcanic gases in an eruption that ultimately killed over a thousand people and buried Pompeii, Herculaneum, Stabiae and Oplontis.

The ash and stones have mostly been removed from Pompeii to reveal a seaside resort city that was once a playground for rich Romans. The amphitheater is in excellent condition as are many of the mosaics that can be found on the floors of the homes of the wealthy. 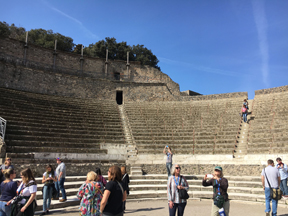 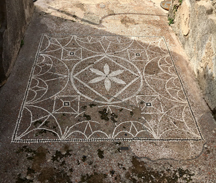 Frescoes adorned the walls of those homes, and many retain their brilliant colors, although earthquakes have caused some to crumble. This particular villa was home to the owner of a gladiator school. 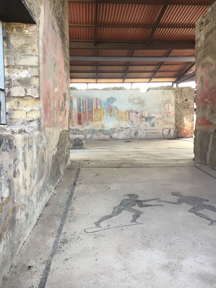 Ovens for baking bread and public fountains for water can be found everywhere. Pottery, amphorae, bowls and other pottery, still in excellent shape, are on display. 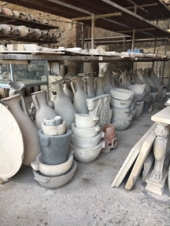 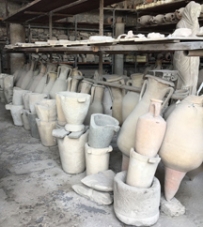 How did they get water to those fountains? Why, lead pipes, of course! The Romans had discovered the malleable metal in England and brought it back to Italy. If the volcano hadn’t killed them, it was likely the citizens would have suffered lead poisoning at some point. 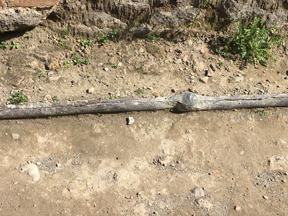 Although not all the walls survived the eruption, the purpose of many of the remaining structures has been determined by what was found inside. There is a treasury, temples, shops and more lining the main square. 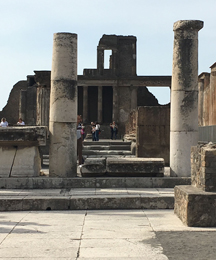 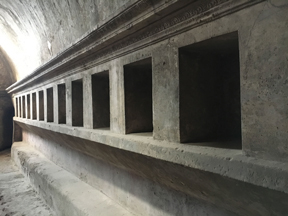 Nooks in the spa 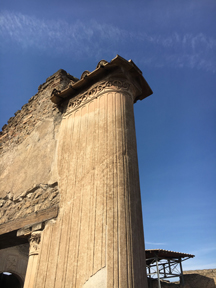 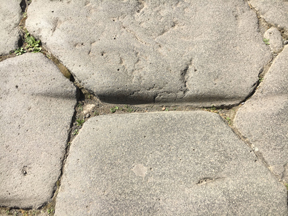 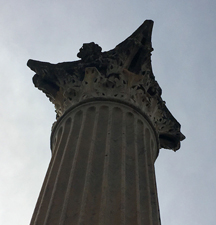 And because this was a resort city, there is a brothel district. It’s not hard to find when there are directional signs right in the pavement.

Since language may have been an issue, fresco menus allowed a patron to simply point to what he wanted. Let’s hope those beds had some cushions, though. 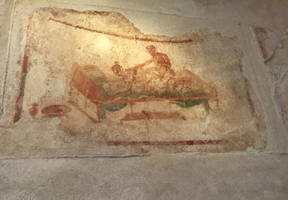 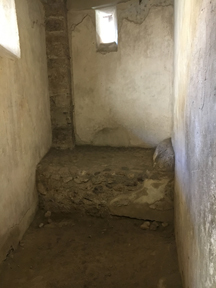 A few plaster casts of bodies caught in the eruption on are display under glass. These were made when voids in the ash were detected. Plaster was poured into the void and then the ash and stone was removed to reveal bodies, furnishings—anything that had been organic. At the time of our visit, most of the bodies had been removed for use in a traveling exhibition.

Upon exiting the grounds, be sure to survey the area. We took a tour of a nearby shop that sells cameos and watched a demonstration of how they are created (they are carved from seashells) before having a traditional lunch. Then we headed back to Rome for our last night there. 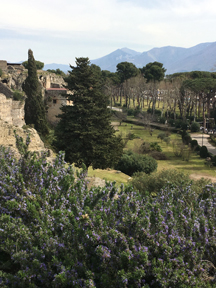 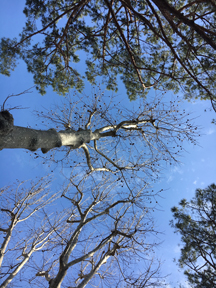