Back in pagan times, a Roman necropolis stood on what is now Vatican Hill. After the fire of 64 AD, Nero accused the Christians of starting the fire. He executed them (we won’t go into detail, other than to say it was gory). Among those crucified was St. Peter—disciple of Jesus Christ and the first bishop of Rome—who was supposedly buried in a shallow grave on the hill. By the time the Christian religion was recognized as the official religion of Rome, Emperor Constantine started construction of the original basilica atop the ancient burial ground with the tomb of St. Peter at its center. The present basilica, built starting in the 1500s, sits over a maze of catacombs and St. Peter’s suspected grave.

Vatican City, a separate city within Rome, is home to that basilica as well as Christian and art museums. Linda, our guide from our tour of the Forum, once again proved how important it is to have a knowledgeable person leading the way. She took what was listed as a two-hour tour and gave us five hours in the museums and basilica. We gained access to places not on the schedule, a necessity considering there are five miles of corridors in the Vatican complex and 70,000 exhibits.

We passed a reproduction of the statue, Pieta, before heading into the Pinacoteca, 18 rooms featuring art in chronological order. Over the years, the popes have been amassing a huge collection of art. Some is altar art rescued from churches that have been destroyed or are simply priceless pieces requiring museum care. Most pieces were commissioned by popes or are from their private collections and include frescoes and sculpture. The collection boasts of 460 paintings, including absolute masterpieces by prominent artists like Giotto, Leonardo da Vinci, Raphael, il Perugino and Caravaggio. 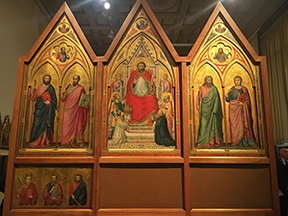 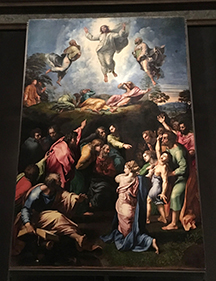 We immediately recognized that painting of King George IV (Prinny!).

Along the way, it was important to look up. Art is everywhere, adorning the ceilings and the floors. Note: Although we did see the Sistine Chapel, no photography was allowed. 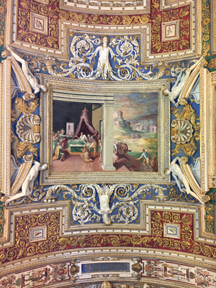 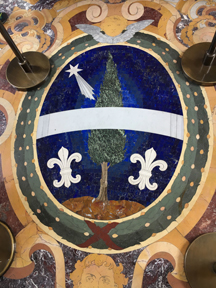 The Gallery of Geographical Maps includes a panel for every town in Italy as well as regional maps. The ceiling is more amazing than what’s on the walls. 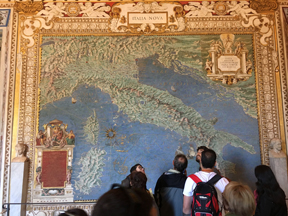 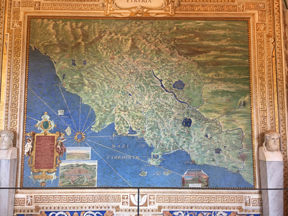 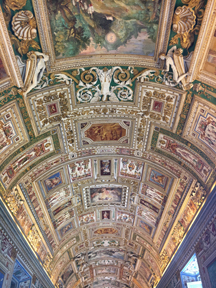 The Pio Clementino Museum, twelve rooms in total, is made up the Octagon Courtyard, the Room of Animals, the Gallery of Candelabra, the Round Room, the Room of the Muses, and the Gallery of Statues (filled entirely with Greek and Roman sculptures, most marble but some in bronze).

We didn’t tour the nine rooms of the Gregorian Egyptian Museum or the Pavilion of the Coaches, but we did visit Raphael’s Rooms. Works include The School of Athens and The Expulsion of Heliodorus from the Temple by Raphael Sanzio. Can you find Raphael? He’s the one who is peeking out at the viewer. Throughout these rooms, there are interesting architectural details as well as proof they have been toured by millions. 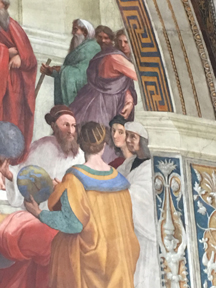 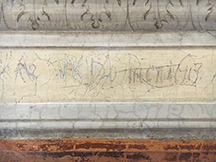 Normally, a visitor would take the helical staircase to exit the museums, but Linda had us heading to the basilica by way of St. Peter’s Square.

An Italian Renaissance church and one of only four major basilicas, St. Peter’s can accommodate 60,000 people and features huge paintings and sculptures. Michelangelo’s famous carving of the Pieta is here. Two lower levels house the tombs of all the popes (the Vatican Grottoes) and Vatican Necropolis, including St. Peter’s Tomb. Only three women are entombed in the Vatican Grottoes; Queen Christina of Sweden, Agnesina Colonna Caetani and Queen Charlotte of Cyprus. 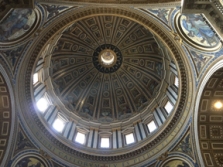 After five hours, it was time for a stop at a outdoor cafe and some refreshment!